Thinking about what your next read is going to be? Author and editor Peter Ngila Njeri shares five reads worth considering.

Peter Ngila Njeri takes daily evening walks. Sometimes long aimless strolls are all he needs to refresh his mind and see around the world. Other times he does with a book in his hand.

An author of “Changing the World While Changing Diapers” (co-written with Isabell Kempf) and an editor, Peter has been reading all his life. His primary goal of reading is to interact with different cultures.

How does he pick a book?

While feeling stuck in the process of editing manuscripts of other writers, he reads a book. He reads diversely: books by African writers, classical to translated novels.

Translations are his medium of reading around the world.

“I believe the world is bigger than English. There are many great books first written in other languages. Translations allow me to read those kinds of books,” he said.

For all book lovers looking for the next read, Peter offers some of his best choices.

Describing it as one of the great books by a young writer, it centers on identity and history.

“It is one of those books which hooks you with its first sentence,” he states.” The plot goes back in time and back to the present moment. It was very multi-layered and gripping.”

After finishing reading the book, it had to take Peter two weeks before he could get to another one.

You can get it here- shorturl.at/iUZ36

It is a historical novel with multiple settings in the middle of a Spanish civil war. The book is set in Barcelona. It was while reading it that I discovered the city is also a character in the novel.

From its story, it shows the impact books can have on one’s life. This book has different points of view.

It is like a book in a book, a book about books. Here- http://shorturl.at/dqRSV

Peter read a borrowed copy of the book two years ago. One of the longest books he has ever read (615 pages), he did so in a week. The book has lots of dialogue and has elements of surreal.

“It is a good choice to read in your lifetime. It is one of the books that has had people convinced that Haruki should win a Nobel Prize in Literature,” he says.

“Under the Udala Trees” by Chinelo Okparanta

Terming it as a modern classic, Peter enjoyed its theme around sexuality because “sexuality is part of our identity as human beings.”

He also loved the novel’s backdrop set during the Biafra War that took place in Nigeria in the 60s.

He also loved how Chinelo has employed the theme of tribal boundaries in the story.

You can get the novel here shorturl.at/tDSXY

It is a historical crime novel set in “one of the most wondrous places in Iceland. The writer manages to move from the past to the present day. The characters of the present day affect the ones in the past.”

He looks forward to re-reading it.

Have you ever read translated books? Which ones were they?

How Early Reading Made Wangari Grace A Stellar Performance Storyteller 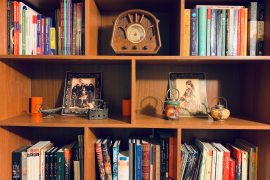 Photo by Alireza Kazemi on Unsplash

Books Guide: Simple Things To Do On International Literacy Day

Photo by Suad Kamardeen on Unsplash

Books Guide: 7 Ways To Be A Book Lover On A Budget