Kenyan band Sauti Sol has set the date for the release of their fifth studio album, “Midnight Train” under their recording deal with Universal Music Group.

The band recently released its first single “Suzanna” off their much anticipated album to be out in May 22.

“The recording of this album was a mishmash of stress and happiness. The process of going through these songs was a lot. But when recording it, we felt that we were ready. We felt the same way too for our previous projects but this time it was on another level,” said Chimano, a vocalist and member of the group.

Adding: Aesthetically speaking, all the four of us in the band was depicted how we are as individuals. We wanted to bring to life the 1970s and 1980s aesthetics and to make our work look 2020 and cool. The production was detailed and it integrated what we had explained what we wanted.”

The group has a recording company, Sol Generation records, and signed Nviiri, Kaskazini and Bensoul who they have worked with in their album.

We sat down with Bien to talk about the art of songwriting, which is a big part of Sauti Sol brand, and founding of a songwriters’ association in Kenya. He also shares how songwriitng has made an impact in his life, what he would like to see in the industry, and more.

BIEN It is one of the legacy projects by Sauti Sol for the industry. We do not plan on holding onto it but we plan to put it into its feet and to make sure that songwriters are actually paid for what they do.

We finally just got clearance. You know opening an association is a process. You have to have a chairperson, you have to have this… there are so many regulations. We just completed the whole process and we are going to start with workshops this year.

NAFSI What role do you play in the Association?

NAFSI How would you describe the aspect of art and business of songwriting in Kenya right now?

BIEN It is sad to say this but it is dead. I have been commissioned to write songs many times in other parts of the world. When I see the structure from other countries, I am amazed at their level of professionalism. You know, in Germany songwriters are given an advance pay because musicians already know that what will be written is going to be a hit. I want Kenya to experience that. I want Sol Generation to be giving song writers an advance pay to write for Nviiri, to write for Bensoul.

NAFSI Having written for many artistes here and in other countries, do you feel the need to create emotional boundaries with your art or do you find complete attachment to your art needful as a creative?

BIEN I am not emotional about it. I just write about the experience of the artist. So I do not write a song and then approach the artist. I talk about to them, what are they going through? What is the story? And then write from there. I have serious emotional attachment to the songs I write as my own. Still, the balance with that has created itself naturally.

NAFSI Who is your first audience when writing a song?

BIEN I think myself first and then my fellow artistes like Sauti Sol and Sol Generation. The song has to captivate me first. I will then hear the opinions of my band mates and Sol Generation artistes. I respect Bensoul and Nviiri as song writers more than as musicians. I respect their opinion. Most of the time they would give suggestions to some of my lyrics and come up with their own.

NAFSI Has songwriting had any impact in your life?

BIEN Yes. It is a good outlet. You are able to tell people your story. It has earned me respect. You know, there is a form of respect that comes with songwriting. It has earned me commercial value too. I have been able to see the world, meet different people, and broadened my perspective. It has taught me how to take peoples’ opinions and not to be too attached to mine. I can do that easily now. I do not hold onto my lyrics. If someone says they do not like my lyrics and they have better ones that make the song better, we put it in there.

BIEN It is important for an artist to work with as many artistes that they need to, to make their work great. Beyoncé has 80 writers in her album, “Lemonade”. Even today in this conference, we did not have 80 people. 80 is a lot of people. People from western countries have moved to an understanding that it does not make them any less of an artist to have songwriters.

NAFSI The upcoming album and documentary you are releasing drives the narrative of mental wellness, with themes of heartbreak and insecurities in it. How did you decide to compile together these themes? 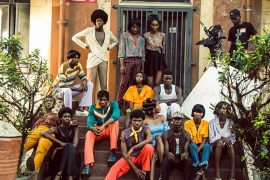 Art Of The Week: Sauti Sol Gives Us Retro Vibes With “Suzanna”