Some two decades ago, Anthony Okello was making art with the hope that one day he would find his own style.

Now, his works are easy to spot from a gallery of paintings. His solo show, “Between Losing and Finding”, opened on June 25 and is to end on July 24 at One Off Art Gallery in Nairobi. A total of 13 artworks curated by Carol Lees, is on display. This show is a moment for him to introspect his artistic journey of getting lost in myriads of styles to find what best spoke to his craft. Anthony uses oil on canvas, and a palette knife for a textured look. The dull colours add to the focus of the moods of the images. This informs his artistic style.

Okello He began his creative journey as a graphic designer. It was a completely different form of expression for him as he used flat colours, which involved a neat and uniformed approach. Painting, which he later picked, required another creative output from him.

He came up with his personal style and introduced it to the world through his first solo show ‘Okello Recent Paintings’.
“God made sure that I did not have anything else to occupy my time with at the time so that I could put all my energy into creating art. He denied me everything so that I could solely do this. This was the time in my life that I became more serious as an artist,” he reflects.

Even after finding his style, Okello still had moments where he doubted his skills, enhanced them, while taking risks. Some of his previous works have explored tribal mythologies and identity.
“Art has its own timing. I have had ideas before which needed me to first improve my skills. I have had those instances where I did not know what I was doing but with my personal journey, experience as an artist, and continuous learning, I was able to express those ideas in my art,” he says.

The “Between Losing and Finding” exhibition immerses both the artist and the audience into a contemplative experience. It brings bereavement into focus through ‘The Heaviness’, created after he went through a personal loss. Okello also poses a question to the audience in ‘Which Side?’ and ‘Prayer Pearls’, works that give them the freedom to think about their identity and where they draw theirs from.

What is the one thing that Okello hopes the audience will take away from this show?
“The Journey.” 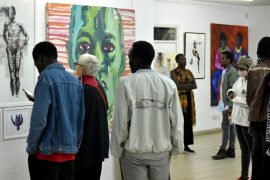 An art salon poses, how else can art pieces be displayed? 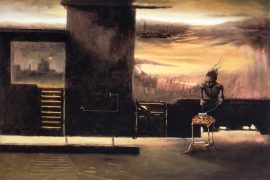 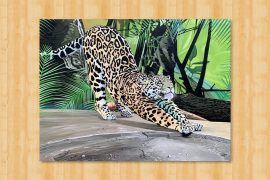